FULL DISCLOURE OF THE FLYING HOSTESS: 3105 REVIEWS with an average rating of 5 & 10,932 sales. On Etsy since 2013 FULL DISCLOSURE As a result of Etsy’s recent review algorithm update only my few lowest reviews are currently pinned to the top of every one of my listings (when viewed in desktop mode). Etsy says this is to show perspective buyers how I handle customer service. yet are not showcasing the majority of my stellar reviews. I invite you to please take in account my total 3105 reviews, not merely a few, also the number of sales which prove buyer confidence & that I have established a business on this platform for over 9 years. If you have any questions, please don’t hesitate to ask. My shop is an extension of me, & I take it very seriously that my reputation is being destroyed by a few bad reviews & the new test algorithms by the marketing /sales team at Etsy which is being tested on a handful of shops. Thanks for reading! Vintage salt glaze pottery wine/beer glass, souvenir of Cochem castle, Germany…Trink edlen Wein aus Ruhlem Stein, translates, Drink fine wine from Ruhlem Stein Picturesque Cochem is a stop for many travelers along the Mosel River. Whether they are traveling by boat, by car, or completely powered by wine, its picturesque castle towering 300 feet above the river draws visitors to the charming town midway up the hill & up to Cochem Imperial Castle (Reichsburg Cochem) at the top. History of Cochem Castle The castle has a long history of invaders, getting overrun, & being rebuilt. First settled by the Celtics & then Romans, Cochem was established in the early 1000s. By 1332 Cochem was granted town rights, filled its coffers by collecting tolls from passing ships, & built town fortifications that still stand today. in 1151 it became an official Imperial Castle (Reichsburg) subject to imperial authority. It was thoroughly destroyed in 1688 by French King Louis XIV’s troops during the Nine Years’ War (or Pflzischer Erbfolgekrieg). It took almost 200 years to be rebuilt by wealthy Berliner, Louis Frderic Jacques Raven, who purchased the ruined property for the paltry sum of 300 Goldmark. Instead of recreating its neo-Gothic look, he built an opulent fairy tale summer residence for his family (in the same year Bavarian King Ludwig II began construction on Neuschwanstein Castle). Since that time, ownership has been transferred several times, including who claimed the land. The Palatinate regionincluding Cochemhave been fought over between France & Prussia until 1815, when it permanently became part of Prussia. in 1946, Cochem was part of the newly founded state of Rhineland-Palatinate. The castle also moved from private ownership to the property of the town of Cochem in 1978. The castle today is an accumulation of its different owners’ & their respective styles. Some tour guides have claimed this makes it a less authentic German castle. Indeed, it is not exactly as it first stood, but it has withstood the test of time, 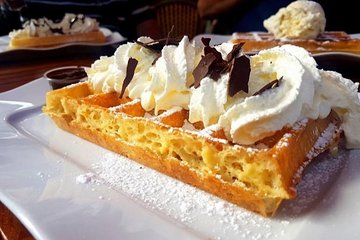